Elm Place, better than before?

So all of a sudden, this week it was announced that plans are underway to convert the jewel of a 60's building built by George Dahl, Elm Place, once the tallest building west of the Mississippi River, into a mixed-use urban tower. 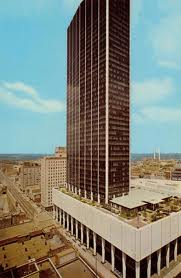 I chose that picture because it illustrates two key things about this building.

First, Elm Place has a respect for the street. There is some set back, and you can definitely see how this would lead to the setbacks of later generations of towers. But, it is more like an extension of the sidewalk. I am not a big fan if I have the option of none, but this is at least done in a way that doesn't harm the urban environment.

The second is the garden deck at the top of the base before the building tapers off into the tower. It is a lovely way to add to the building's amenities. Not many have something like this (I can think of two) and I am glad to see it is coming back.

Now onto the proposal. The developer is from Turkey, the architect from Dallas (coincidentally they office right across the street). It calls for a mix of retail, office, residential and public space. Click for the proposal.

Here's a snapshot of the use by level. 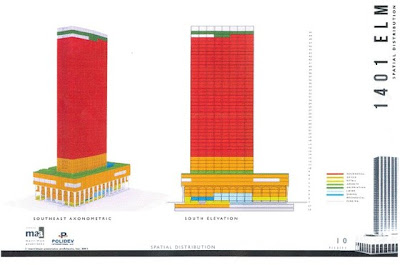 Red is residential, orange is office, yellow is retail, the green at the top of the base will be a public space (or rather, open to the public) while the observation deck at the top will reopen to the public (great views here if you get a chance to look someday). Parking will remain underground.

But here's the best part. This may be the first redevelopment of a vacant building that will completely shutter the tunnel system underneath it. The Merc closed access, so it may count, but from what I can tell, this will be a total closure, and unlike the Merc, it is in the middle of the system. The map for Elm Place's tunnel can be seen here.

They add retail to a dock bay fronting the Akard Station, giving it a better frontage, both for the building and for transit users. Akard Station is the third busiest rail station in the DART system.

I count 484 residential units and several floors of office. This is exactly what I have been thinking should have happened to the building a long time ago. The base is too large to be broken down into residential units, but the tower is nice and slender. It is ideal for a mix of office and residential.

Overall I am really excited about this project. It is scheduled to begin renovation in October and be completed the first part of 2014. TIF funding has already been approved, so this looks as promising as things can be given the current development climate.

Remember, I said downtown would need another 28,000 units this decade to match the growth rate of the past one. Coupled with what is underway or about to be, this means downtown only needs another 27,000. That number is slowly falling.
Posted by Branden at 7:53 PM No comments: Links to this post

Back in March, I touched on some Florida and Arizona cities struggles with Spring Training stadiums and how to finance them. Now, the University of North Texas is unveiling a new stadium for the upcoming football season. Additional commentary can be found on Unfair Park's blog.

Bottom line, the stadium cost $79 million and supposedly, using the flawed multiplier effect, a $29 million annual economic impact is calculated. The odd thing is, the researcher, Micheal Seman, if I am not mistaken, would be the same Michael Seman that I went to school with, and really should know better, since we got into these same debates in some of the classes.

Sadly, this will not generate much, if any economic impact.

1) Sports stadiums do not generate new money, they generate a redirection of disposable income. People do not debate whether they will pay rent or go to a game, pay the electric bill or buy a ticket. So regionally speaking, there is little extra spending.

2) There is little to no economic development around stadiums. As I have covered before, there is just not enough activity for a business to build a base around. Even baseball stadiums, with near 100 events a year can't, because there is an hour window before a game and a half-hout afterward. Besides the small window, most stadiums, with concession stands, restaurants, bars and suites are designed to capture the discretionary dollars that might have gone outside the stadium. And to top it off, those expenditures are quite often tax-exempt.

Look around Texas Stadium, (old) Reunion Arena, La Grange Field, Lone Star Park or numerous other sports facilities in the area to see that example. Even Victory Park, of which the American Airlines Center is part of a master plan by one developer, is struggling to build out. What has been built is extremely under-patronized (though poor urban design surely plays a factor).

3) This is a replacement stadium. There will not be many new fans coming. There will still be visting teams, just like the other. Perhaps there will be more fans because higher profile teams will come, but not likely. There may be more home games, but at most one. The small increase is likely to miss the seven figure mark, let alone the $29 million cited in the study.

4) There will not be any long-term increase in attendance because of the facility. D Magazine tried to say that the Rangers World Series year was an outlier. More specifically, winners attract fans, not stadiums.

The best the stadium boosters can call for is increased pride in the University (or city) and increased recruiting of athletes who want to play in better stadiums in college than they did in high school. I can't argue that point, yet rarely is that ever given as a reason to build the things.
Posted by Branden at 6:24 PM No comments: Links to this post

Email ThisBlogThis!Share to TwitterShare to FacebookShare to Pinterest
Labels: stadiums

A revisit on parking

Have have visited the topic of parking before (and before and before), so allow me to post another's blog post on parking. It comes off a little preachy, but otherwise is fairly solid.

It makes a lot of the same points I have, but goes a bit more in depth and is illustrated quite well to visualize the points made.
Posted by Branden at 1:47 PM No comments: Links to this post